Russell Rafferty joined the department in April 2016 to fill the position of Captain of Training and Safety assigned to “A” Battalion.  Captain Rafferty started with a 2 week M-F orientation schedule in order to meet everyone and get an idea of the weekly rout

ine before assuming his position on shift.

Captain Rafferty has more than 30 years of fire service experience with his last assignment as Deputy Chief of Operations, EMS, and Training for the City of Deltona Fire Department in Deltona, FL.  Prior to taking on the position in Deltona, Russ served with the City of Port Orange Department of Fire and Rescue where he began his career in the fire service as a volunteer/part time firefighter in 1982 rising through the ranks as an Engineer, Lieutenant, Shift Commander, and finally as Division Chief of EMS. He is a certified National Registry Paramedic, EMS Instructor, Fire Service Instructor, Fire Inspector, Fire Officer, and Health and Safety Officer.

Captain Rafferty holds an Associate’s degree in Emergency Medical Service, Bachelor’s degree in Organizational Management, and is a 2010 graduate of the National Fire Academy’s Executive Fire Officer Program.  Captain Rafferty has become an excellent addition to our staff.

Russell and his wife Sabrina have two (2) children, Bryant 26, who lives in Virginia with his girlfriend and is currently a General Manager of a Regal Movie Theater and Serena 17, who is a senior in High School and will graduate in 2017 with plans to attend the Daytona State College Nursing program in Florida.  Russ and Sabrina currently live in Greer and are looking for a permanent home in the area after re-locating to Glassy from Florida in April 2016.  He is an avid Chicago Bear fan and enjoys tennis and spending time with his family and his three boxers Wrangler, Minnie and Peytyn.

Please join together in welcoming Captain Rafferty and his wife Sabrina to the Glassy Mountain Fire Department family.

We Train – We Train 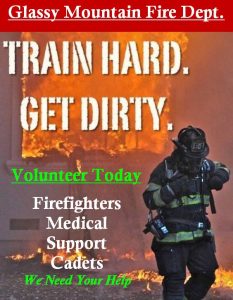 Your Role In Recruitment 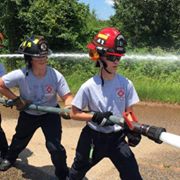